A Peer Data Review experiment to bridge a support gap, not a skills gap 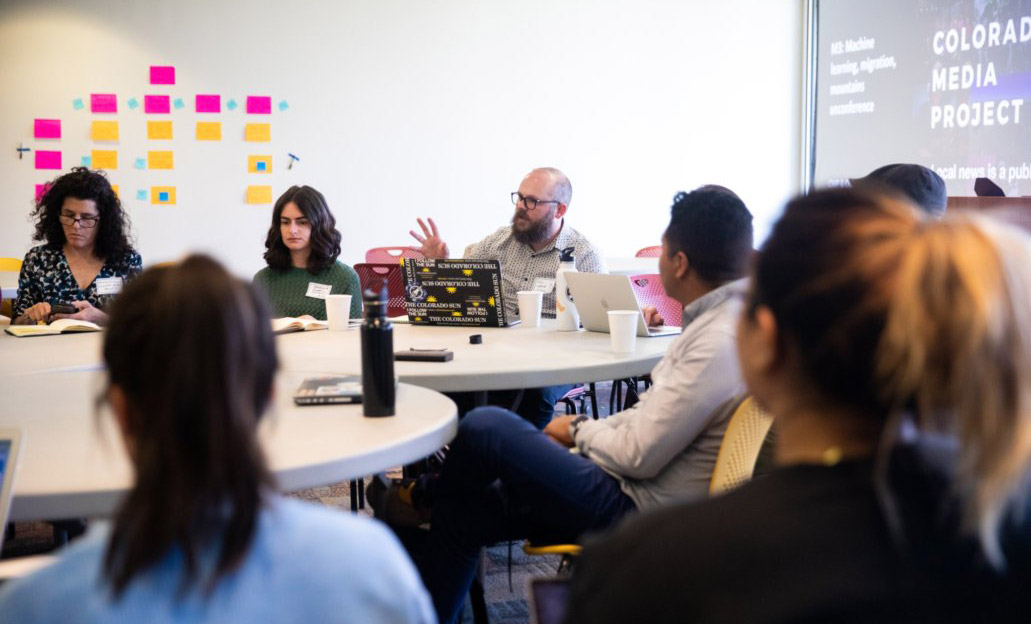 Some of the seeds for Peer Data Review were planted at a training day for local journalists this May. (photo/Alyson McClaran for Colorado Media Project)

This fall we ran a pilot program that offered peer coaching for journalists with a data story in progress but no colleagues to backstop their work. A dozen people connected with community volunteers, so that’s 12 journalism projects moving that much closer to having an impact—something worth celebrating!

The Peer Data Review program was community-powered, informed by conversations over the past year with many journalists in local and regional newsrooms. We modeled it on the kind of coaching that already takes place informally in places like Slack DMs, email lists, and conference lunches. Not everyone knows help is out there, though, or feels able to ask for it. This program’s purpose was to make that network more visible and accessible, and to learn what could make a peer-driven support system sustainable.

We organized Peer Data Review as an experiment from the start, open for a month of responding to requests for help, then several weeks of followup and assessment. It’s so exciting to see all our hopes now showing up in program feedback: “Having an experienced person to bounce my ideas off of was so valuable—especially since I don’t have someone in my immediate workspace who knows much/more than me regarding data journalism.”

We’re counting this pilot as a huge success, with some key takeaways heading into 2020:

In the next month or two, we’ll be looking to share some of the stories that were published after peer coaching. This network of news nerds shows up for each other, and we hoped that outlining a simple process and helping people connect would make that support easier to offer and easier to find. It’s exciting to see such tangible results right away.

(And if you’re curious about how we ran this experiment, read on! We’re all about working in the open and learning from what we do, so here’s how we put the program together. I hope you like bullet points, because we have bullet points.)

To build something worth testing, we had to make some assumptions about how a Peer Data Review program should operate. Our experience organizing community-support programs gave us a place to start, but we also: looked at other peer-review programs with similar goals, checked in with people who lead journalism trainings, and talked with journalists who’ve asked friends in other newsrooms to look over their work. We ended up with a few principles to drive our decision-making:

How we ran the program

Those documents gave us a complete picture to share as we invited people to join the pilot as coaches, with room for them to respond with ideas and adjustments. In a little more than a week, we had nine volunteers, enough to feel comfortable launching publicly. And their observations about our program documentation helped us keep clarifying expectations and identify the right questions to ask participants.

Our project form would be the first part of any conversation between peer coaches and participants, so it needed to be short but detailed. We asked people to tell us about their data and what they hoped to do with it, what tools and languages they were most comfortable in, and any specific questions they already had.

And we developed an outreach plan to make sure that people who could really use Peer Data Review actually found out about it at the moment they needed it. We had so much help spreading the word through tweets, posts, and newsletters from organizations like LION, INN, API, Nieman Lab, Poynter, and Local News Lab. We shared details in journalism Slacks and email lists. (And I still feel like there are lots of journalists who’d love to have a peer look at their work but never heard about this program. We also heard from journalists who were excited about peer review but didn’t happen to be working on a data story while it was open.)

With our program page published and the outreach plan in motion, requests for help began to come in. As they did:

In the month the form was open, we connected 12 projects with coaches. A small number of requests for help weren’t quite right for this program, and we tried to explain why and then connect those people with different resources.

After the pilot program closed, we got back in touch with coaches first. In a feedback form we asked a few questions about how things went, whether they felt like their time was valued, and what kind of questions we should ask participants about that side of the experience. We waited a few weeks to ask for participant feedback to give people time to act on the advice they got through the program (and maybe even publish what they were working on). Some of those comments are still coming in, and we’ve already learned SO MUCH from testing the assumptions we came into the program with.