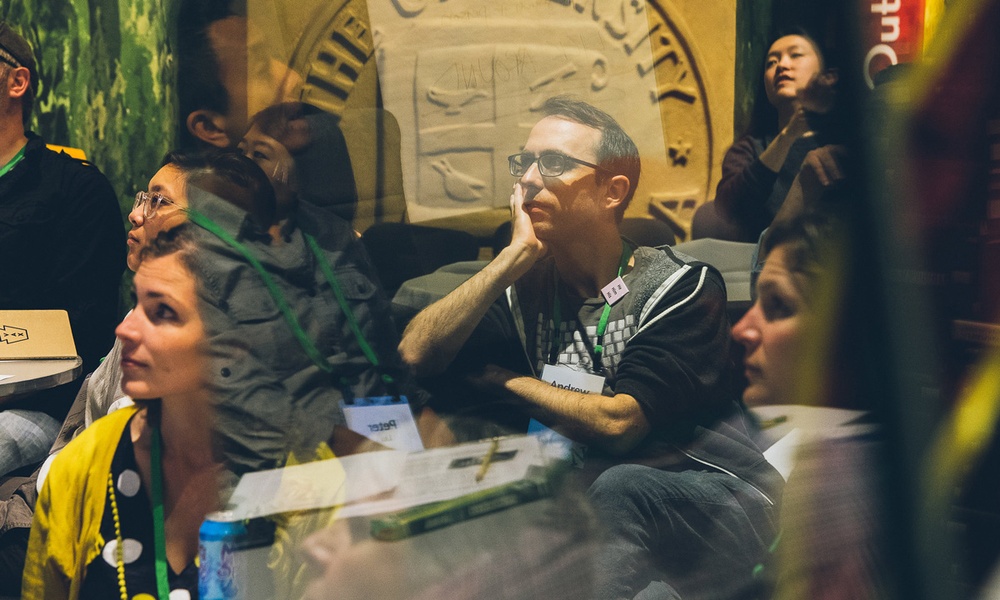 As a John S. Knight Journalism Fellow at Stanford this year, I’m researching how we can better manage and support journalists with technical skills. My research focus comes from my own experiences as a journalist-coder making interactive graphics and newsrooms tools at Vox, the Chronicle of Higher Education, and the Los Angeles Times.

During the summer before the JSK Fellowships began, I joined the planning committee for OpenNews’ second News Nerd Survey. Since its founding in 2011, OpenNews has emerged as a leading nonprofit dedicated to supporting the journalism-tech community, which sometimes self-describes as “news nerds.” The initial survey in 2016 was the first major census of this community, with 514 responses that revealed a baseline understanding of its demographics, pain points, and desires.

This year’s survey netted 756 respondents who answered new questions about salaries, career growth, and in-demand skills. That’s a 47 percent increase from the previous year. (To give some perspective, 800 to 1,000 people have attended the NICAR conference annually for the past several years.) You can read the full report and the interactive for the survey at the OpenNews blog.

Advising the survey dovetailed neatly with my research. I hoped that the data from new questions we introduced this year would empower individual journalists and newsrooms alike to make appropriate decisions about career development and advancement.

Despite data journalism’s long history, the recent backlash against the rise of code- and data-driven work reveals the special challenges that journalists with technical expertise face. No one suggests a newsroom can survive without its writer-reporters — although cost-cutting executives have certainly tried — but less consideration is given to its data reporters, designers, and developers. These technical journalists encounter skepticism from both outside the newsroom by confused critics who conflate their work with presidential election predictions and inside the newsroom about their abilities and workflow.

While there are many intriguing findings in this survey, I’m focusing this piece on salaries because it’s one of the top reasons why news nerds have left their jobs in the past five years. The final results confirm many hypotheses on pay equity that technical journalists discuss in secret: a news organization’s product or engineering departments tend to pay better than its editorial side; women generally get paid less than men; New York and Washington, DC command the highest wages; and unionized organizations show higher salaries than newsrooms without unions.

1. Salaries and benefits are not the main reason why news nerds leave a job, but they’re within the top 3 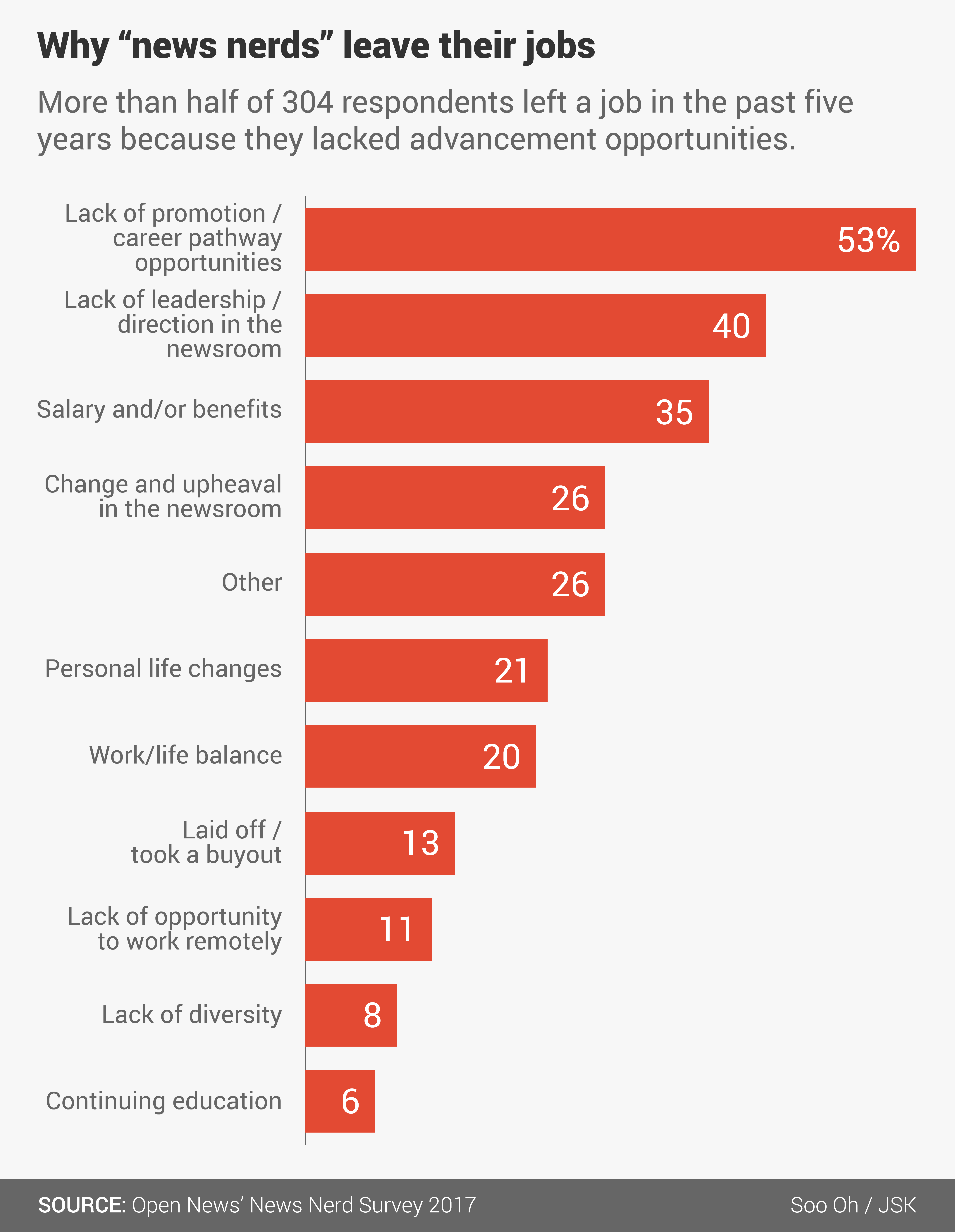 61 percent of nearly 500 respondents in the United States and around the world have left a job at a news organization in the past five years. They cited lack of advancement opportunities, lack of leadership or newsroom direction, and salary and benefits as their top reasons for leaving. These results correspond closely with other studies about why employees leave and why they stay.

2. Your role inside a news organization affects your salary

No factor accounted for as much difference in earnings than whether or not you managed people. The majority of managers in the US make $110,001 or more a year, whether or not they led teams that produce journalism or an organization’s core technologies. 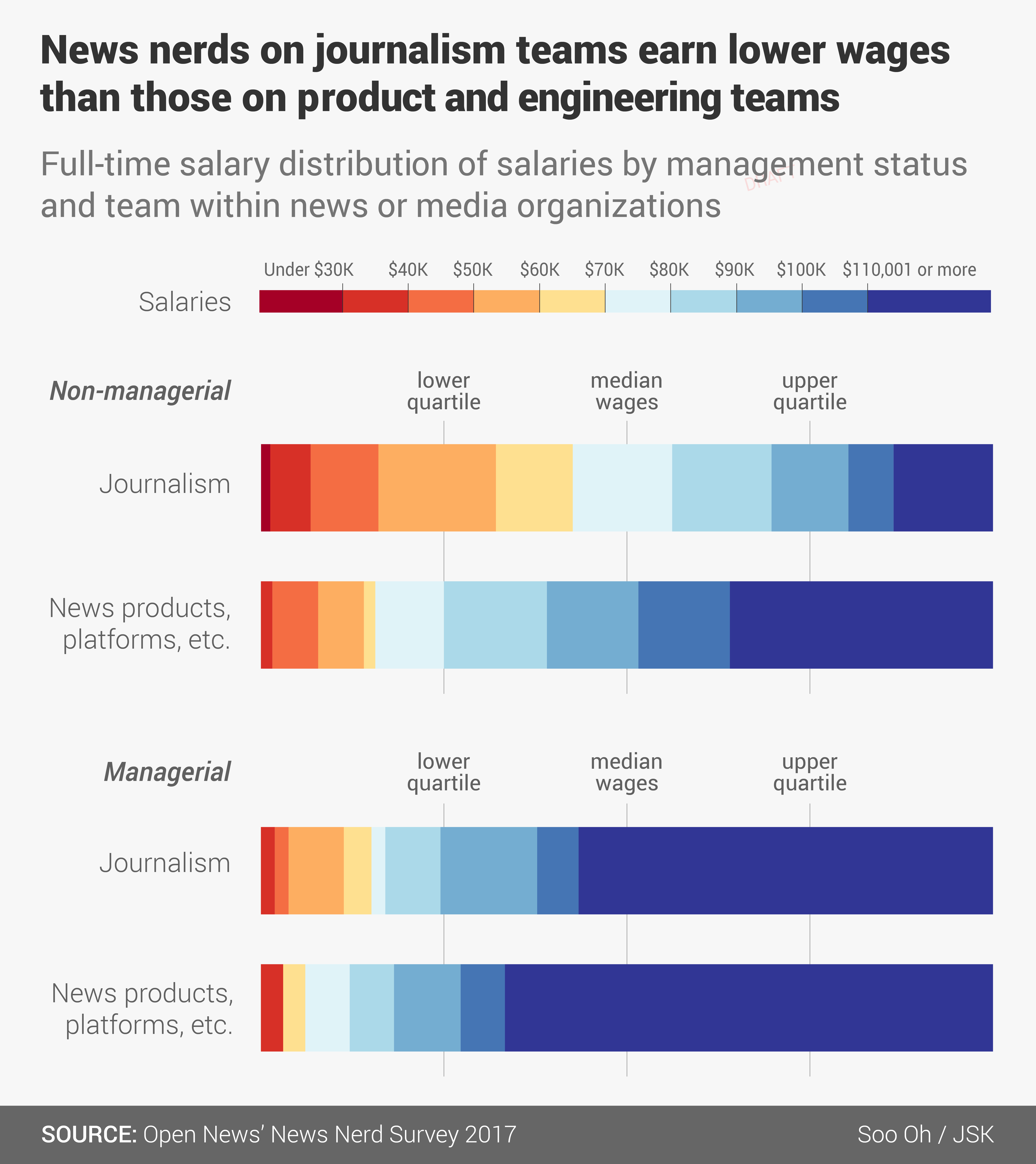 The survey asked how much respondents earned in salary increments of $10,000, with the lowest value “Under $30,000” and the highest “$110,001 and above.” It seemed like a worthwhile trade-off between getting good data and people withholding their salaries once the buckets got too high. Based on our results, that call was right for non-managerial roles, but that means we have less information to help the majority of managers understand their salaries.

For non-managerial workers, what your team produces is nearly as important as the fact that you don’t manage anyone. Technologists who work on a news organization’s CMS, core website, or other platforms have median wages between $90,001 to $100,000, while journalists who work on news stories, graphics, data journalism, news applications, and other digital efforts earn median wages of $70,001 to $80,000.

3. The newsroom pay gap is real

For the next three data points, I limit all the reported salaries to US respondents who work at least 30 hours or are salaried on teams that produce journalism. 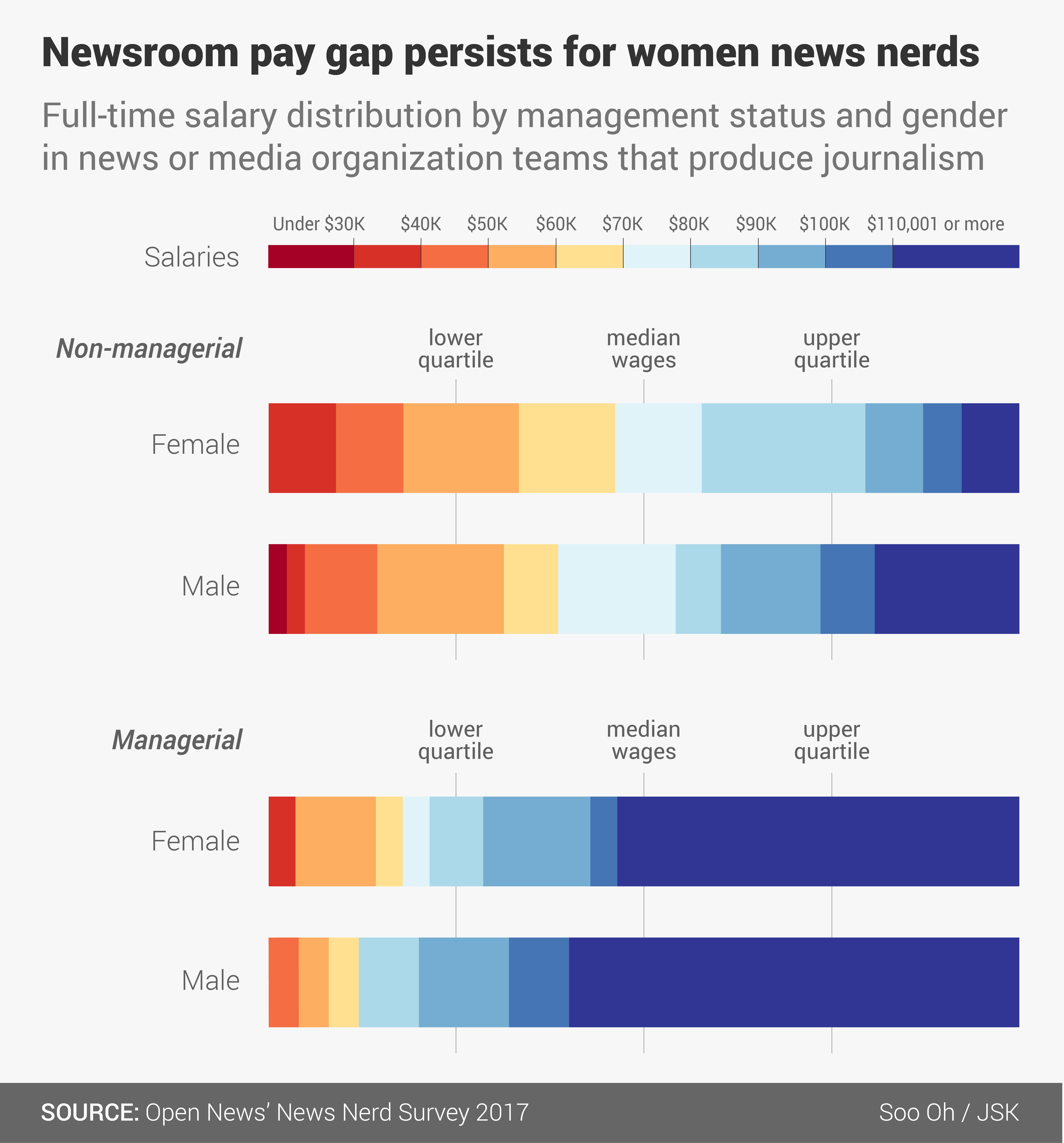 There aren’t enough people of color in the sample who submitted their salaries to be able to publish data about them without revealing their salary ranges. If you’re interested in working with the raw data, contact Erika Owens to discuss.

4. New York and DC own the market, but they pair high salaries with some of the highest costs of living

Salaries between New York and DC aren’t too different; by quartile, they match up pretty well. Median earnings for non-managerial roles in both cities fall in the $80,001 to $90,000 range — tracking pretty closely with figures from the Bureau of Labor Statistics for reporters and correspondents. 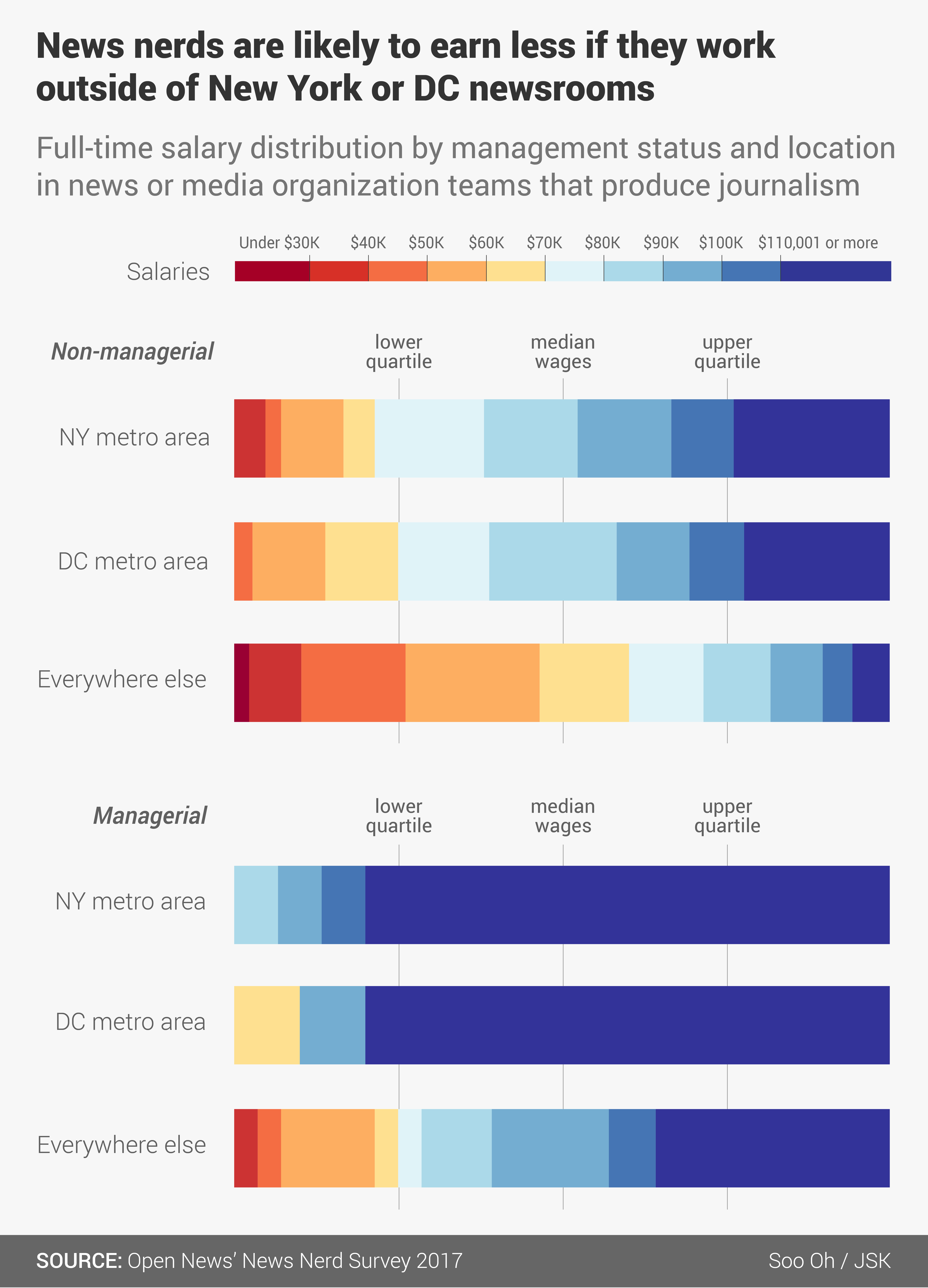 But a quick check in a cost of living calculator shows that Manhattan is almost 55 percent more expensive to live in than the DC area; living in Brooklyn reduces that to about 18 percent.

Other areas were less well represented in the survey. Of non-managerial respondents, 42 came from the New York metro area and 36 from the DC metro area. We combined the 88 respondents who didn’t live in the two major media capitals out of concerns about making their data identifiable. (For example, the third most-answered location, the San Francisco Bay Area, had only 8 respondents.) The same held true for managerial positions: 15 came from the New York metropolitan area, 10 from the Washington, DC area, and 28 from everywhere else. 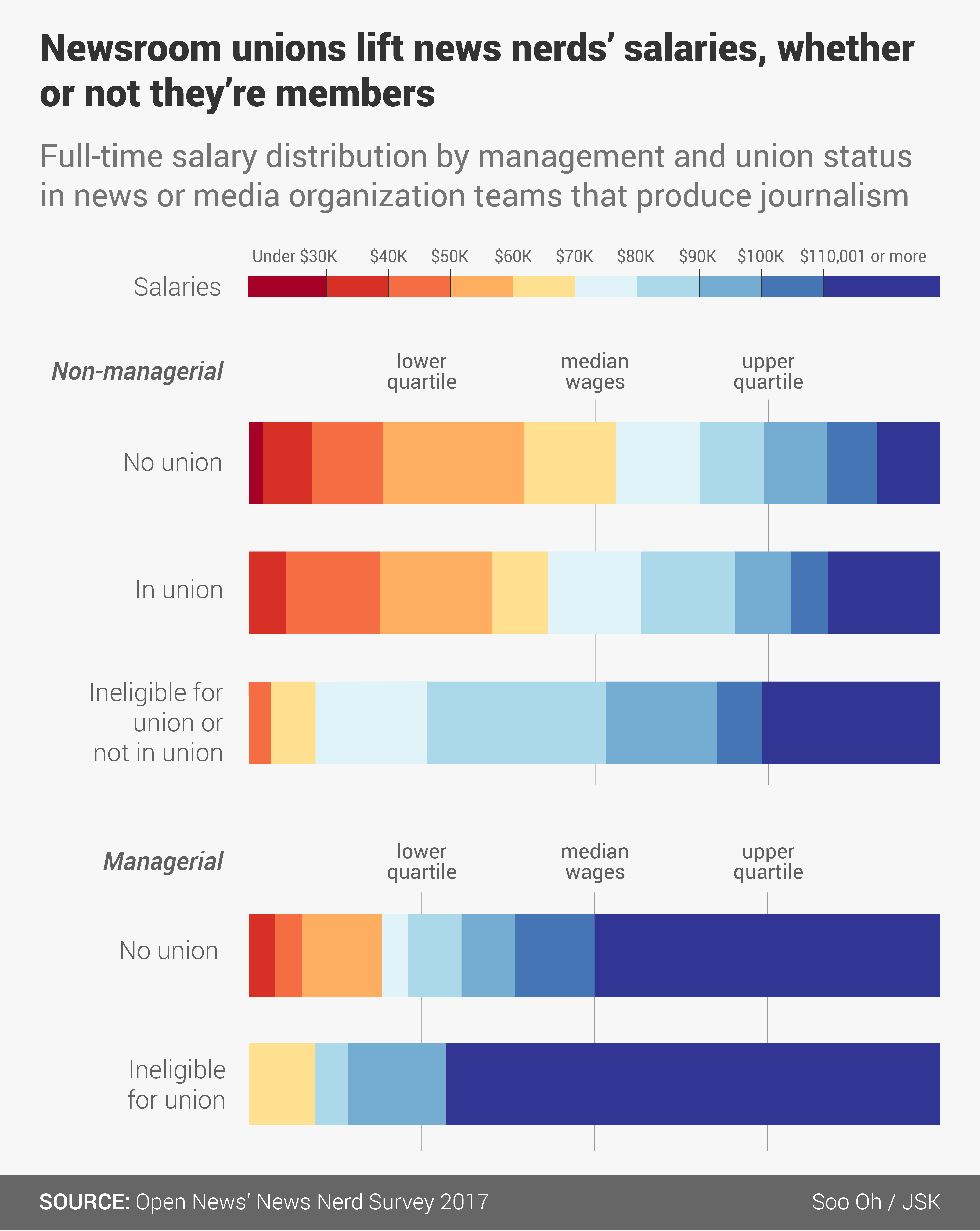 The results for non-managers are even more interesting. While journalists in unions are more likely to earn higher wages than their counterparts in non-unionized newsrooms, not actually being in a newsroom union — 75 percent of these respondents were ineligible to join — still results in higher wages overall.

Along with discontent over salaries, journalists cite lack of career opportunities and lack of newsroom leadership as reasons they’ve left their job in the past five years. That suggests some potential problems and ideas:

I’ll continue to write about the survey results and other areas of research in managing and supporting journalists with technical skills in the coming months. Contact me if you have any questions or thoughts.

If you’re attending SRCCON:WORK, join me and Erika Owens for an interactive workshop on news nerd salaries. We’ll be talking about everything you can ask for during negotiations, understanding your organization and its gatekeepers, and strategies for responding in the moment.

If you’re not attending the conference, we’ll be documenting the entire workshop here in the session’s Etherpad (an online document anyone can view and edit in real-time). You’re free to ask questions to me and Erika directly, or write out any questions in the Etherpad before the session begins.

This article has been cross-posted to Medium.